One thing I can tell you about walking the first stage of the Camino, typically the route through the Pyrenees from France into Spain, is this: it’s just really not all that easy. You leave the sweet village of St. Jean Pied de Port and start climbing into the mountains and before you know it, you’ve gone farther than you ever thought possible and the surrounding vistas are spectacular.

The guide books all say the same thing – “your climb is arduous but you will be rewarded with stunning views.” I think that’s hilarious. The only reward I was looking for was a tall glass of ice water and a chance to lie down. Please don’t get me wrong though, the views are amazing and you get to see small farms in the distance along with sheep, cows, goats, birds, flowers – it’s all wonderful. 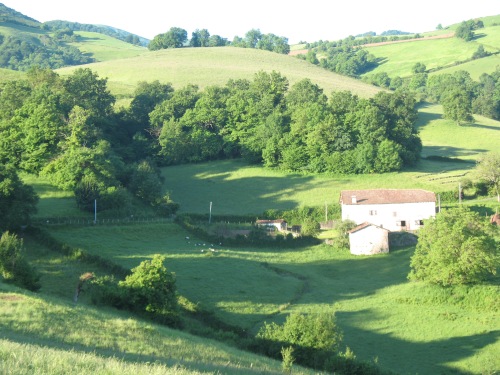 Unfortunately, there really is not a great halfway place to stop along the route. That would have broken up the climb and given us the choice to stop overnight in the mountains. This is not to say the walk needs to be broken up into two stages but it’s always nice to have the option if you aren’t feeling well or need a serious break. 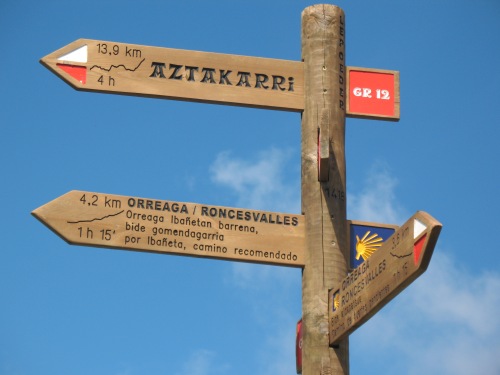 We started at daylight, late in May, and it was very cold in St. Jean. I was worried I wouldn’t be warm enough, so I wrapped my scarf around and around my neck, thinking that would be all I needed. Little did I know, it was actually sunblock that I needed because not a half hour passed before I had taken off my sweater and my scarf and walked the rest of the day in a sleeveless tank top. I struggled with my backpack and my beloved son carried it a good bit of the way – along with his. I have such great memories of watching him walk ahead of me with a bag of potato chips hanging from the side of his pack.

No sunblock and not enough water! The woman at the pension in St. Jean said, “Don’t worry about water – there’s a lot of places to fill up your bottle. You don’t need the extra weight.” Seriously, I believed her and was down to my last half ounce of water before we came upon a fountain that gushed ice cold water.

Once you cross into Spain, you find yourself in a beautiful forest, coming down into Roncesvalles. The standard pilgrim greeting in France is “Bon chemin!” but it changes subtly until everyone you greet wishes you a “Buen Camino.” No passport or border control necessary – you know you’ve walked into Spain by the way your fellow pilgrims greet you.

My son walked ahead of me down the mountain path and we met up in Roncesvalles in the early evening. We checked into a hotel and walked across the way to an outdoor cafe for sandwiches and something to drink. It was shortly after that when I realized I was too sunburned, too blistered to continue walking another day. We had no intention of walking to Santiago de Compostela on this trip, but we did plan to take another two days walking to Pamplona. Instead, we hailed a cab to Pamplona and to this day, I regret not giving my son the experience of walking the route from Roncesvalles to Pamplona.

In Pamplona however, we did have some fabulous tapas and pintxos. From there, we made our way on to Madrid to meet up with my daughter who at the time was in a study abroad program there.

What did I learn? Carry less. If there is one lesson to learn over and over again, it’s just that: carry less. And if it’s the least bit sunny, use sunblock. When I got back to my job, someone saw the sunburn and asked if I’d been to the beach and without thinking I responded, “I don’t go to the beach, I burn too easily.” Where was that smart cookie when I was in the mountains in Spain?

Final thought: I have walked many stages of the Camino since this daylong trek but if this was my only day on the Camino, for the rest of my life I would be able to say that I had crossed the Pyrenees from France into Spain with my son and we walked in the footsteps of Charlemagne. That’s pretty extraordinary, all in all, and I am still so very proud of this achievement.